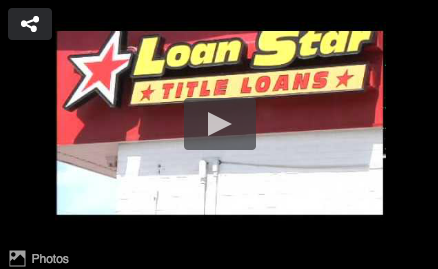 State Representative Terry Canales says it's a vicious cycle referring to the debt accrued by the elderly or mostly low income residents in the valley who seek out loans in times of need.

Payday loan and title loan companies can be found on every other street corner in valley cities and Canales says they promote a great deal to get people out of a tight spot.

But the truth is, many of these loan companies have insane interest rates on loans that can never be repaid.

"The interest rate is so high the time your paycheck comes that won't even cover the loan."

That's why Canales says many cities throughout the state of Texas are taking steps to protect their citizens from predatory payday and auto title loan companies.

But he thinks more valley cities should follow suit.

"They should pass municipal ordinances to protect their citizens."

Canales says there are some companies doing the right thing, but customers willing to put down their car title or paycheck as collateral for loans are doing so at their own risk, that is, until their city governments can make sure they're protected against excessive fees.

"The legislation has been proposed but it's in gridlock that's why cities are saying they'll fight it themselves even if they go to court."