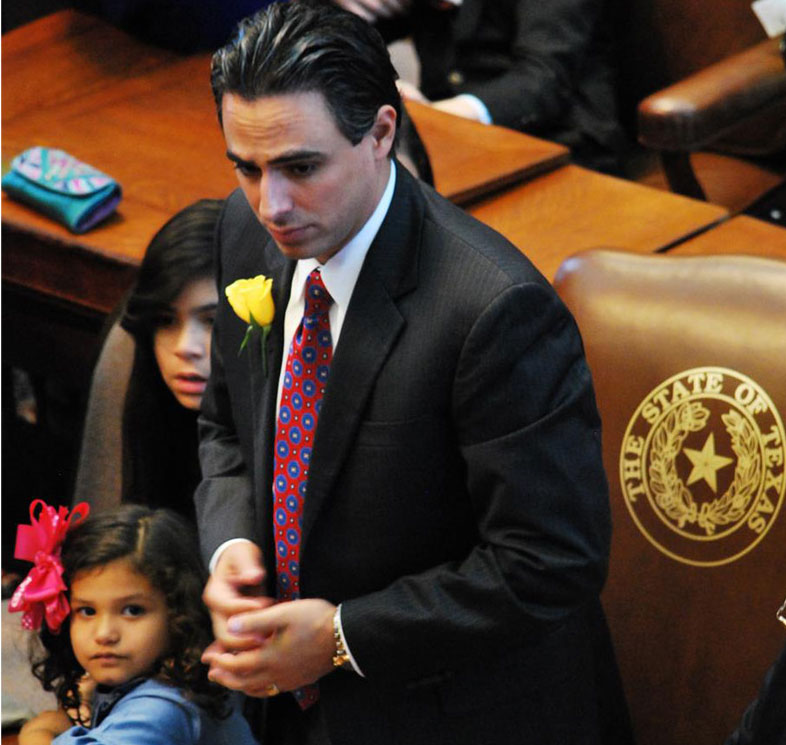 Terry Canales was born in Hidalgo County and is a native of South Texas.

He was elected to the House of Representatives in 2012 to represent District 40, which encompasses the heart of Hidalgo County.  The cities within District 40 include Edinburg (Hidalgo County Seat), Elsa, North Pharr, San Carlos, La Blanca, Faysville, and portions of McAllen and Weslaco.

Rep. Canales is a passionate advocate for education, always striving to ensure that our children are seen as an investment and not an expense. He holds a deep-rooted belief that education is the cornerstone of society and a great equalizer.

His views on education are undoubtedly a result of his family background, his professional training, and his sincere desire to ensure that all children have the opportunity to succeed.

As the son of a former schoolteacher, he was immersed in the inner workings of the public education system early on. As a child, he watched his mother teach during the day and attend college courses at night so that she could complete her Master’s Degree in Special Education. 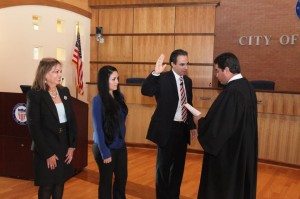 My mom (far left) and my wife Erica join me for my swearing in by 92nd District Court Judge Ricardo Rodriguez.

Crediting his parents for his perseverance which allowed him to earn his Juris Doctrate by the age of 24, Rep. Canales has often said, “Watching my mother seemingly accomplish everything she set her mind to made me certain that I could do the same.”

A descendant of Spanish immigrant pioneers who settled in the arid land currently known as South Texas and Northern Mexico, Rep. Canales takes deep pride in his heritage and family history.

Having been raised on a cattle ranch that has been in his family for over five generations, Rep. Canales has an invaluable knowledge of the inner workings of the Texas cattle business and knows the importance of the agricultural community to Texas.

“My parents instilled in me the value of hard work through their pride in our ranching heritage while stressing the importance of education.”

As an avid lifelong hunter, fisherman, and member of the Coastal Conservation Association, Rep. Canales has an intimate understanding of the vast Texas ranching community and coastland. His love of the outdoors has given him a unique insight into the ever-growing hunting, fishing, and birding industry, which has become a driving force of the Texas economy. 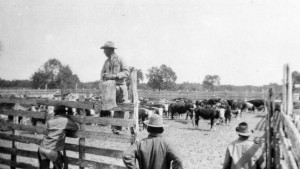 My Grandfather Praxedis Canales at La Cabra, our family ranch.

“Each of us has the responsibility of leaving Texas better than we found it, so that future generations will have the opportunity to enjoy the blessings of living in the Lone Star State.”

Having grown up in the heart of South Texas, Rep. Canales worked in the oil fields as a roustabout and backhoe operator, giving him great insight into the oil and gas industry.

As an attorney who has represented clients involved in oil and gas litigation, mineral disputes, and oil field accidents, he not only knows the law surrounding the industry, but he is also aware of its importance to the Texas economy, the job market, and the thousands of families who depend on it.

“Texas is blessed as a mineral-rich state, but we must harvest those minerals from the earth in a responsible manner, so as not to pollute our precious water tables and delicate ecosystem.” 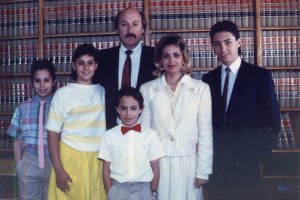 Following in the footsteps of his father Terry A. Canales, a former State District Judge, and his uncle Arnulfo Gonzalez Jr., Rep. Canales attended and completed his law degree at St. Mary’s University of Law.

Upon passing the Texas State Bar Exam, Rep. Canales opened his own law practice on Closner Boulevard in Edinburg, Texas,  the heart of District 40. He is a general practitioner with a distinguished trial record and a reputation for zealously advocating for his clients. He specializes in Oil and Gas litigation, Criminal Defense, Personal Injury, Family Law, Real Estate, and Municipal Law.  Having represented thousands of clients and multiple municipalities, he is on the forefront of many issues that affect all Texans. 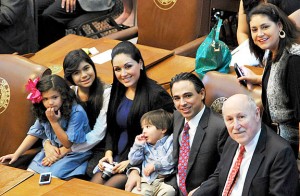 My dad and my sister (right) join me for this history-making moment.

Rep. Canales says being an attorney counselor at law is extremely rewarding.“Helping people is what the practice of law is all about, and pro bono work is the staple of every successful practice.”

Rep. Canales made history on January 8, 2013, when he was elected to serve as a State Representative. His victory marked the first time voters had elected three members of the same family to the House of Representatives: His father, Terry A. Canales, was the first Hispanic State Representative to represent Jim Wells County, serving from 1973-1977. His sister Gabriella “Gabi” Canales served in 2002.

He is also the sixth member of his extended family to serve in the Texas House of Representatives. Perhaps the most recognized of Rep. Canales’ family is his great uncle, Jose Tomás Canales, a Brownsville Democrat who served a total of five terms between 1905 and 1921. He was a founding member of the League of United Latin American Citizens (LULAC), and is most famous for defending the Hispanic community against the injustices perpetrated by the Texas Rangers.

Rep. Canales is married to Erica E. Canales, and is the father of Terry Andres Canales II, Caleb Ezra, Trígo, Catalina and the stepfather of Juliana Figueroa. They live in Edinburg, Texas, where Juliana attends school and Baby Terry attends pre-school.

“Being a father is by far the most daunting challenge I have ever encountered….most anyone can raise a child, but raising them right, so that they are productive, self-sufficient, contributing members of society is the real goal,” Canales says.