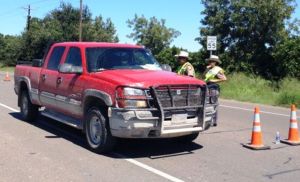 “I think a majority of people support the surges,” said state Sen. Juan “Chuy” Hinojosa, D-McAllen, a member of the committee. “The controversy that came up in the last surge was the checkpoints.”

Dewhurst called for a $60 million boost to DPS’s annual budget – possibly enacted this month – to conduct surges similar to Operation Strong Safety across the border region, the Texas Tribune reported.

Operation Strong Safety was a $3.4 million, three-week initiative in the Rio Grande Valley that included increased patrols and traffic checkpoints in DPS’s primary jurisdictions — rural areas and unincorporated colonias — and ran from mid-September to early October.

The checkpoints garnered statewide attention and became something of a wedge issue locally. Immigrant advocates feared the checkpoints were actually being used to round up and identify those illegally in the country, a charge DPS and local law enforcement denied. In any case, Dewhurst said the checkpoints would not be part of enforcement surges in the future.

A representative with the Valley’s American Civil Liberties Union chapter said discontinuing the checkpoints was welcome, but did not go far enough.

“At least the Texas Department of Public Safety learned from the public outcry over its recent unconstitutional checkpoints in border communities and chose (to) put a stop to them,” ACLU-Brownsville advocacy coordinator Astrid Dominguez said in a statement. “Lieutenant Governor Dewhurst should take note and abandon his call for continual surges.”

State Rep. Terry Canales, D-Edinburg – a vocal critic of the initiative at the time – questioned the announcement’s timing, considering Dewhurst is in the midst of a tough re-election primary race.

“Why does this now become an issue right in the middle of election season?” he asked. “We’ve had problems on the border for decades now. Why wasn’t the lieutenant governor so interested during session or last session?”

Whatever the reason for the added focus from the state on border security, at least a couple of local law bosses looked forward to increased resources from outside their offices.

“I am all for the surges, and I support any other future surge, as long as it is not tied to enforcing immigration status laws,” Hidalgo County Sheriff Lupe Treviño said. “And they didn’t.”

“I’m for it 100 percent,” he said. “Not only does it give us the financial means to operate, but (it gives us) more (officers) on the road.”

Dewhurst was unspecific about from where the money for the increased operations would come.

Though he also did not speculate as to the source of revenue for the program, Hinojosa indicated funding would not be a problem.

“We have not shortchanged any part of public safety in the state,” Hinojosa said, citing increases to the public safety budget in recent legislative sessions.